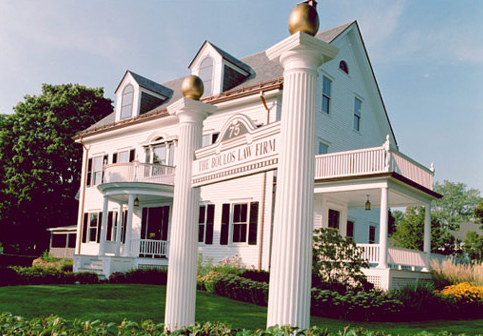 The Boulos Law Firm was established over thirty years ago by James G. Boulos. He set out to build a practice which exclusively concentrated in the area of criminal defense. Today, it is one of the only firms in the State of Maine which concentrates solely in that area of the law.
Over the years, the firm has developed a recognized expertise for aggressively defending those charged with "Operating Under the Influence" (OUI). According to the Bureau of Motor Vehicles, In 2010 there were 7834 arrests in Maine for Operating Under the Influence. Interestingly, of that total, 1800 (22.9%) of those tested for an alcohol level had a level below .08. Also of note, between 2000 and 2010, the number of annual OUI arrests in Maine declined 20.6%, from 9878 arrests in 2000 to 7834 in 2010. Geographically, most of the firm's cases originate in Cumberland and York Counties. Vigorous and intelligent representation of several thousands arrested in those and other counties throughout the state is one of the cornerstones of the firm's continuing success.
Equally important, it legitimizes the founder's original belief that those who are charged with a criminal offense whether its a murder, a crime of violence, a property crime, a drug offense, or an OUI are generally better served when they are represented by lawyers who exclusively practice criminal law.
Today, the firm is located in the Edmund Burnham mansion which it purchased in 1993. The property, built in the mid 1800's in the Colonial Revival Style, is located in Saco's National Historic District. Upon completion of extensive renovations over a two year period, the firm was given the Saco Planning Award for excellence in "land use, planning and development". The project is widely thought to be one of the finest home-to-office conversions in the state. The building's amenities not only encourage excellence in the workplace but serve to give some measure of comfort, security and dignity to clients who find themselves in somewhat difficult circumstances.
The firm is pleased to announce that in July of 2011, Ed Folsom, a former member of The Boulos Law Firm, published "Maine OUI Law," a reference book with citations to and summaries of cases statutes and rules that are important to issues in a typical OUI case. It is the first attempt to cover this ground in Maine. On October 27, 2011, Woody Hanstein, a member of the trial bar, wrote the following on the listserve of the Maine Association of Criminal Defense Lawyers:
"It was just Monday when I received Ed Folsom's new book, Maine OUI Law , but already I don't know how I managed without it. In this slim and elegant book, Ed lays out the statutory authority and cases related to every aspect of defending an OUI case. Not surprisingly, all of it is done in the same orderly, precise style Ed uses regularly when he shares his thoughtful opinions on this listserve. And best of all, everyting in this book is organized so well that while your computer is still warming up you can find the answer to, say, where things now stand on fresh pursuit and extraterritorial stops or whether a driver's failure to sign a hospital release form constitutes a refusal to take a blood test or the name of that Law Court HGN case you can never remember. Maine OUI Law costs just $40, and I can't imagine how anyone would consider handling OUI cases in Maine without it. I lost an OUI jury trial to Ed Folsom back around 1990 when he was in the Portland D.A.'s office, but I can even overlook that to let you know what a service Ed has done for all of us. So, buy this book."
Maine OUI Law may be ordered from www.amazon.com or from the publisher, www.brysontaylorpublishing.com.